Did BCIMC and its subsidiary Parkbridge Instruct its Lawyer and Bailiff to Break the Criminal Code of Canada?

In the Editors opinion, Kelowna lawyer, Brianna Hardwick, and Comox Valley Bailiff Ltd. boss, John Bradshaw, are criminals who should be put in jail.

The photos posted here show some of the wilful damage to the private property of lawful tenants on the Pacific Rim Resort property carried out by agents of Comox Valley Bailiff Ltd. and its manager John Bradshaw under the watchful eye of an RCMP officer with his hand on his gun  who refused to enforce the law and protect private property from wilful damage by out of control government agents.

These acts are more evidence an  ongoing  criminal conspiracy  to loot the Pacific Rim Resort property in defiance of the law. 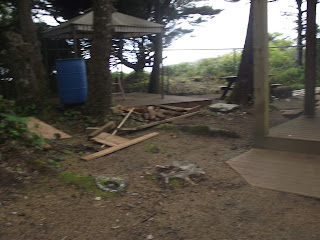 Section 94 of the Residential Tenancy Act is clear.

94  Despite any other enactment, no order of a court in a proceeding involving a foreclosure, an estate or a matrimonial dispute or another proceeding that affects possession of a rental unit is enforceable against a tenant of the rental unit unless the tenant was a party to the proceeding.

Bradshaw and Hardwick were fully informed of section 94 of the Residential Tenancy Act but destroyed property and ejected the tenants. 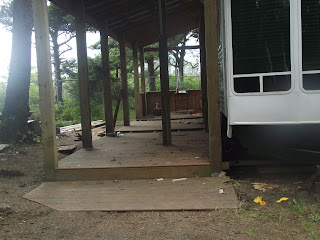 At least three persons, who were not parties to the foreclosure proceeding that sold the property to Parkbridge, were tenants on the land and they were either illegally barred from their residential premises or their residential premises were illegally damaged and removed from the lands where they were located under existing tenancy agreement.  The property damage is estimated to be thousands of dollars.

These three tenants were entitled to the protection of the Residential Tenancy Act.

The Editors expect to post more photos of other the damage done by out of control agents of the Government of British Columbia in the coming days.

The Editors have been informed that the tenants intend to bring criminal changes against Bradshaw Hardwick, Parkbridge, the police officer involved and anyone else who was in the chain of command for the illegal ejectment of the tenants.

It is also believed that Bradshaw is part of a local criminal mob on Vancouver Island some of whom were part of the continuing criminal conspiracy against the English family.

Readers who are in a position to confirm Bradshaw's affiliation with the criminal underworld are asked contact Jack English by e-mail at pacificrimresort@hotmail.com or by telephone at 250-266-2599.